The Decapodians are a species of sentient lobster-like creatures, originating from Decapod 10. They have blue eyes, red skin and hand-like mouths. The Decapodians seem to be a bald species, much like the Antarians, the Amphibiosans and Morbo's species, though they can grow hair that instantly turns white after experiencing a traumatizing event. Their society is often pictured in contrast to that of Earth. The Decapodians are ruled by the Decapodian Emperor, but while many indications of their society seems to suggest a totalitarian government, they have a democratic process. They are also a member of the Democratic Order of Planets. The most well known of the Decapodians is Planet Express staff doctor John A. Zoidberg.

Decapodian culture shows the traits of being authoritarian and they seem to be strict beings, who do not welcome change to their society. Despite the authoritarian sense in the species' members, many of them are known to flock to other worlds, perhaps in search of a less strict society. It can be assumed that Decapodian society isn't strict in format, but essence of its authoritarianism is uncanny, and as a result the sense stems to its citizens. 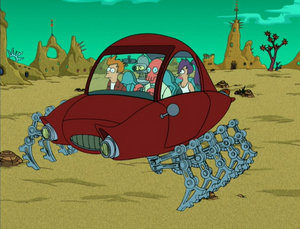 Decapodians live in buildings made of packed sand, and much of their infrastructure is based upon sea-based material and imagery, such as a crablike car. Decapodians often settle matters of honor and lesser matters such as whether abbreviations count in Scrabble during their ritual of Claw-Plach, a battle to the death before an audience. For some reason, most Decapodians have generic Earthican names such as Edna, John, Norman, etc.

Parenting is perhaps one of the more complicated parts of Decapodian culture. And while clues are revealed during the course of the series, it remains unclear how exactly the parent-child combination works in Decapodian society.

In "Why Must I Be a Crustacean in Love?", it is revealed that when Decapodians passed on their genes, they die. But in order for the establishment of Decapodian society to make any sense, a former generation (or more generations) must remain behind to take care of the offspring, in order to teach them with the cultures of society, which means that Decapodian society must have a regular "reboot" of society. This would mean that all Decapodians are exactly the same age, except the ones who stayed behind to look after the offspring. Alternatively, there may be two generations active at any given time, with the majority of the older generation all dying during mating season.

Further evidence are introduced in "That's Lobstertainment!", when Zoidberg mentions to Harold Zoid, that he is the boy of Norm, Sam and Sadie. The "mother" shown in "A Taste of Freedom" can be assumed to be a parental figure, rather than Zoidberg's actual biological mother (who he could never have known, especially since she notes that his parents are in graves). A possible explanation can be that Norm, Sam and Sadie are all parental figures, who took care of Zoidberg among others. An alternative explanation is that two of the "parents" are his actual biological figures, and the last is his parental figure; either "Sadie" or "Sam[antha]".

Politics in Decapodian society seems at best complex. They are known to have an Emperor, but at the same time, they have a democratic process to elect new leaders. It is also possible that the elections are essentially a show for the citizens.

Despite the chain of leadership, Decapodian ambassadors are allowed to declare war upon other governments and lead the wars. For instance, Ambassador Mervin lead the war against Earth in 3003. The Decapodian Army's foremost advantage is their warships, but these unfortunately are expensive, so replacements for the warships, such as the Mobile Oppression Palace are built to maintain the oppression of newly conquered worlds. Unfortunately for Decapod 10, Dr. Zoidberg destroyed the Mobile Oppression Palace that was in place on Earth.

Decapodians (or at least Zoidberg) have an additional head inside their mouth (6ACV10).

Like lobsters or crabs on Earth, Decapodians have no bones. Instead they have an exoskeleton—a hard, chitinous shell which gives their body the rigidity needed to move about. These shells—like seemingly most of their other organs—are not an integral part of the body, but are molted and replaced when they grow too large (3ACV01). They may vary in colour from pink, red, or brown, and all hues in between. They have claws instead of hands and feet, and have a row of four small finger-like flaps that cover their mouths. These flaps are used to grip food and to aid in mastication. Unlike the claws of earthly crustaceans, which are designed to grip and crush, the claws of Decapodians are also designed to cut, and are capable of cutting through flesh with very little effort, and metal if enough force is applied. The thorax has three ridges, possibly containing respiratory orifices, and ink pouches are set in the armpits. A blowhole is set on top of the head, and the males possess a decorative fin in the same place that can be erected at will in times of the mating frenzy. Males also have testicles located at the back of their necks. Decapodians also breathe through gills that are on the sides of their necks, and Zoidberg has been seen burping using these fins. Like some terrestrial crustaceans, Decapodians are capable of breathing air by using branchiostegal lungs.

Other than above mentioned organs and functions, Decapodians have an extremely complex nature, with many functions and organs that really have no use (for example their four hearts). It has also been hinted that disemboweling a Decapodian is nonlethal, and a lot of their organs may be the result of their numerous parasites.

When threatened, a Decapodian can unleash an ink defense similar to that of an octopus. The Decapodian rapidly takes off their clothes, releases black ink from their armpits while screaming, and run away while their enemy stands shocked and, hopefully, momentarily blinded.

Decapodians (or at least Zoidberg) also appear to have an additional head inside their mouth (6ACV10), but this might also be some sort of parasite, such as the Cymothoa exigua.

The male jelly of a Decapodian comes out of his "wazoo" (2ACV05). 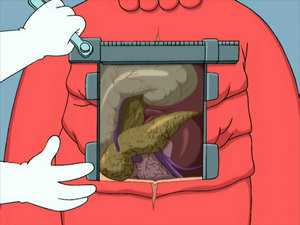 Decapodians seem to be able to grow hair when exceptionally surprised or frightened (6ACV15).

Decapodians are cold-blooded, and the blood appears to be light purple in color. Internal organs are numerous and seem to be vestigial or redundant. They include, but are not limited to:

Decapodians go through many different stages during their lives. Starting off as tiny larvae in a puddle, they progress through no less than a dozen forms (4ACV09). In their "Coral Form", their siblings bud off. In their mature form, Decapodians are bipedal humanoids. The mating phase is probably not part of their life cycle, but a ritual they go through during their mating season.

They seem to age more slowly than humans, as Zoidberg has known Professor Farnsworth for at least 93 years (6ACV18). 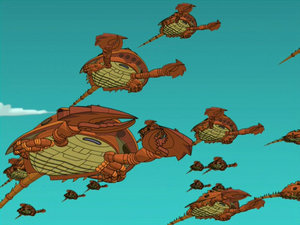 Like many Earth mollusks, Decapodians create pearls when irritants are introduced into their throats. These pearls are blue in appearance and can be used to make jewelry (3ACV13).

After participating in the frenzy, the Decapodians die a gruesome death. This brings into question how Zoidberg knew his parents, but not enough is known to draw any conclusions (i.e., they may have been adoptive parents from another generation). Zoidberg also states that he is "Norm and Sam and Sadie's boy" (3ACV08), which implies Decapodians may have three parents, whether that be one biological and two adoptive or some other combination (or all biological), however it may also be coincidence, that three Decapodians picked up Zoidberg, which may also suggest that some children are taken care of, after they return to shore. It may also be that two parents are biological, and one adoptive who didn't get the chance to mate. Nevertheless, one of Zoidberg's memories showed him with a mother figure when he was a young humanoid (4ACV05).

It is also possible that not all matings result in death, but only matings related to the frenzy; Yivo was able to mate with Decapodians without causing any known deaths (TBwaBB), and Fry mated with Leela while in Zoidberg's body (6ACV10). This suggests that they may be able to mate with members of other species without it resulting in their death, or that they can choose whether to unleash their productive jelly. It can also mean that a Decapodian mind must be present in its original Decapodian body in order for the Decapodian to fully mate. 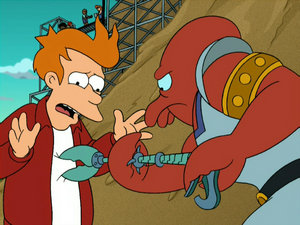 Dr. Zoidberg: Fry, it's been years since medical school, so remind me. Disemboweling in your species: Fatal or non-fatal?

Decapodian Emperor: Once invoked, the sacred tradition of Claw-Plach can not be taken back. It is a recent tradition, only 18 years old, but it is a tradition nonetheless.

Not all episodes featuring Zoidberg are listed, only episodes showing other Decapodians, or those revealing new information about the species.