From The Infosphere, the Futurama Wiki
(Redirected from 4ACV12)
Jump to: navigation, search

"The Sting" is the sixty-sixth episode of Futurama, the twelfth of the fourth production season and the ninth of the fifth broadcast season. It aired on 1 June, 2003, on Fox. Fry dies after being stung by a bee queen while trying to save Leela, and the guilt of his death drives her crazy. However, not all is as it seems.

Act I: "We're just as good as any of those other crews you sent to their deaths!" 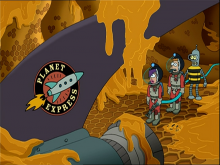 The crew discovers the old ship.

As Fry and Bender are playing virtual golf, the Professor comes in and explains that they are not good enough for their next mission: collecting honey from space bees, which claimed the lives of the old Planet Express crew. Leela insists that they are just as good and forces Fry and Bender to go on the mission.

The crew reaches the bees' hive and paints Bender's body like a bee, giving him a bee language cartridge that will allow him to communicate with the other bees to distract them while they venture deeper into the hive. They eventually come across the remains of the old Planet Express ship in the process (where the black box reveals the previous crew died due to the captain's insistence they prove themselves better than the Professor's expectations). The crew eventually discover the honeycomb stockpile, and a flow of royal jelly, into which Fry falls. Leela comes across a baby queen bee, which she takes, so that the crew can build its own hive in the future, and takes some jelly with which to feed her. Suddenly, Bender accidentally insults the bees, including the current queen, causing the enraged bees to chase them back to the ship.

On the way back to Earth, the baby queen wakes and threatens to kill Leela. Fry throws himself in front of Leela in defense, but is impaled in the spleen with the stinger, which passes through him and mildly stabs Leela as well. Bender picks up the defenceless dying queen and throws her into the air lock, ejecting her into space (where she is hit and killed by a space truck). Leela gets up with a minor wound from the stinger and is horrified to discover that Fry is dead. 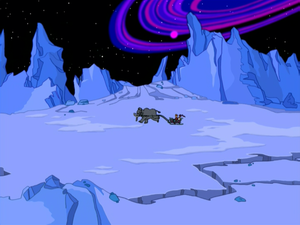 Fry and Leela in the ice fields of Hyperion

Fry's funeral is held at the Orbiting Meadows, where many old acquaintances come to mourn. However, none is more woeful than Leela, who believes that it was her error that caused Fry's death, and is wracked with utter remorse. Towards the end of the processions, Fry's coffin is ejected into the outer reaches of space. Back in her apartment, Leela remains sorrowful as she goes through all of the belongings that Fry had given her. Having kept some of the space honey from the mission, she takes two spoonfuls to ease the pain and, after having a brief laughing fit, quickly falls into a deep sleep. She then finds herself floating in space with Fry, who seems to be alive. Leela is not entirely certain, especially since Fry still has a gaping hole through his abdomen, so Fry decides to prove he's alive by telling her that he left something for her in his locker, which only he would know. He then tells her that he wants her to wake up; it turns out that this experience was only a dream.

Leela tells the others about her dream and what she was told, explaining that if it's true, then he must still exist in some form or another. When she opens his locker, she is disappointed to find that it is completely empty. Bender then comes in, saying that he pawned most of the stuff in Fry's locker for closure, keeping only one item because it turned out to be a present for Leela: a one-eyed stress-relieving doll. Leela marks this as proof that Fry is still alive and is communicating to her in her dreams. However, a quick brain scan leads the others to conclude that Fry told her about the present before his death, and that she subconsciously blocked it out in her grief. In other words, they begin to think that Leela might be going crazy.

Later that night, Leela has another dream in which Fry is still alive. She is convinced, however, that Fry must still be alive, since he treats her very romantically, and that she couldn't be treated any more so by her own imagination. When Fry takes her sleigh-riding on the ice fields of Hyperion, he gives her his jacket before telling her to wake up once again. Leela is reluctant to accept that this is just another dream, but wakes up anyway. Her hopes are once again dashed until she discovers that, although she is very much awake, she is still wearing Fry's jacket. Since Fry was buried in this jacket, she is once again convinced that Fry is truly alive. 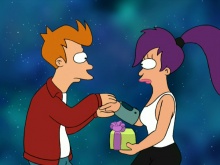 Leela and Fry in Leela's dream.

Leela comes to the headquarters the next day to show the others the jacket, but it turns out she has her own jacket. Leela admits that she may be freaking out (especially after hearing Amy and Hermes speaking with the Professor's voice, and Bender with Amy's), and decides to take some more space honey. After hearing this, however, the others warn her that she must not take too many spoonfuls; one helps a person calm down, two help a person get to sleep, but three can place a person into a sleep from which they can never awaken.

As Leela cautiously takes a couple of spoonfuls of space honey, she becomes drowsy and accidentally knocks over the jar of royal jelly (which she also kept from the mission) onto the couch. All of a sudden, the jelly begins to take some sort of solid form, eventually transforming into Fry, who is completely naked and covered in jelly, but apparently very much alive. Leela presents Fry to the others; after examining him, the Professor concludes that Fry's DNA was imprinted into the jelly when he fell into it, and that a new body was formed when the imprint merged with his DNA in the couch. Leela is relieved that everything can return to normal and that she no longer has to carry the burden of guilt for his death, until Fry tells her to wake up again; it turns out that Leela merely fell asleep again after eating the second spoonful.

Leela realizes that she is comfortable in her dreams while her mind plays tricks on her when she's awake. This is evidenced when Leela hallucinates the crew performing a musical number, during which each member explodes after being stung by a bee. Afterward, Leela decides to go out into space to find Fry's coffin; her plan is to retrieve Fry's corpse and keep it under her mattress to remind herself that he's really dead, which means dealing with her guilt again. When she finds it, however, she wakes to find herself in her room once again, with the others' faces on the walls and floor, chanting the accusation that she killed Fry. After tearing the faces down like wallpaper (and vacuuming up Bender's face, which is on the floor), Leela finally believes that she is now insane.

She decides that she will take enough space honey to put her in the eternal sleep so that she can be in her dreams with Fry forever, as that is when she does not feel guilty. Just as she is about to take the final spoon, Fry's picture on her bedside table comes to life and tells her to fight her impulses, but Leela is so confused as to what to do that she breaks into tears. Fry continues to bolster her, saying that she's stronger than this. As Leela attempts to overcome her irresolution, a small space bee starts flying around the room. Leela throws the jar of space honey at it, causing it to turn into an entire swarm of smaller bees. With Leela hopelessly scared and confused, Fry admits his love for Leela and begs for her to wake up once more. Leela wails that she doesn't understand what Fry means. The scene then cuts to Fry at Leela's bedside in the hospital, crying and begging Leela to wake up.

It turns out that when the sting of the baby queen went right through Fry's body and Leela caught all the poison in her seemingly mild wound, putting her into a coma that lasted for two weeks. Fry, after getting a new spleen from a man who liked to ride motorcycles, never left her side while she was unconscious and kept talking to her in the hope that a familiar voice would guide her back, which came to her in her "dreams". The final shot shows Leela and Fry hugging each other...they then tell each other that they need a shower.

This episode was named #24 on IGN's list of top 25 Futurama episodes. 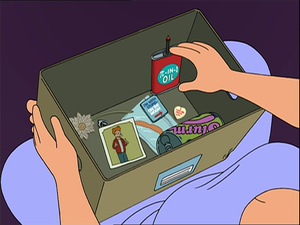 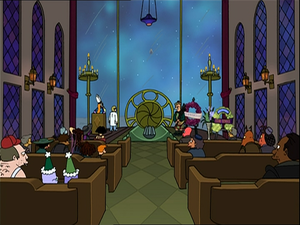 Leela: What's the mission?
Farnsworth: Collecting honey. Ordinary honey.
Leela: That doesn't sound so dangerous.
Farnsworth: This is no ordinary honey! It's produced by vicious space bees. A single sting of their hideous neurotoxin can cause instant death!
Hermes: And that's if you're not allergic! You don't wanna know what happens then, oh no no, God no.
Farnsworth: Your insides with boil out of your eye sockets like a science fair volcano!
Hermes: I didn't want to know! [cries]

Fry: Oh, my god! The old Planet Express ship!
Leela: There's the black box.
[Leela picks up the honey-covered black box and presses play.]
Planet Express crewman: [on black box] Captain, the bees have us surrounded! Oh the Professor was right, we're not as good as his old crew!
Planet Express Captain: [on black box] Well, I aim to prove him wrong. It'll take more than a few deadly, deadly bees to... [The bees start buzzing loudly.] OH LORD!
[The captain screams in terror and agony. The crew wince before Leela presses stop.]
Leela: Uh... Couldn't make that out. Too much static.

Fry: Leela, no! Listen to me! You don't wanna lie in bed like a vegetable and do nothing the rest of your life. I've tried it. Bedsores hurt!

Leela: [crying] It was all my fault! He died because of me!
Farnsworth: [comforting] No, no, no, no, no, no. [shouting to Bender] I'm lying to make her feel better! [Leela cries harder.]

LaBarbara: [After Hermes burns Fry's time card in his coffin.] Husband, can't you go anywhere without lighting something up?!
Hermes: It's an old Jamaican accounting tradition; we burn his time card. That way, his zombie doesn't come back, looking for his final pay check.

Leela: [twitching] I'll find Fry's coffin, get his corpse and keep it under my mattress to remind me that he's really dead. That'll prove I'm not insane!

Leela: Is this some sort of brain scanner?
Professor: Some sort, yes. In France, it's called a "guillotine".

Father Changstein El-Gamal: I barely knew Philip, but as a clergyman, I have no trouble telling his most intimate friends all about him. [general sobbing]
Hermes: Soothe us with sweet lies...

Bender: All those times I said "Kill all humans," I'd always whisper "Except one." [sobbing] Fry was that one, and I never told him so! [crying]