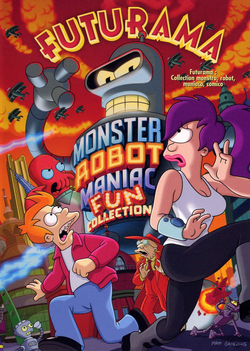 Monster Robot Maniac Fun Collection is a single disc DVD collection released on 23 August, 2005. It contains four of the most acclaimed Futurama episodes (one from each of the seasons of the original run), hand-picked by the show's creators Matt Groening and David X. Cohen. 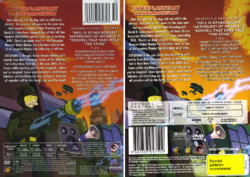 Comparison of the back cover. Region 1 (left) and Region 4 (right).

Quit your job, sell the dog and run wild in the streets! The universe will never be the same now executive producers Matt Groening and David X. Cohen have crammed four of their all-time favourite FUTURAMA episodes onto one astonishing DVD. There's no doubt about it - the Futurama Monster Robot Maniac Fun Collection ranks as one of the greatest Maniac Fun Collections of all time.

FUTURAMA is the epic, Emmy-Award-winning sci-fi comedy from Matt Groening, creator of The Simpsons. Set in New New York City in the year 3000, it's a future unlike anything you've ever imagined... unless you've imagined booze-powered robots, semi-literate lobsters, and horrifying yet sexy cyclopses. Someday all comedies will be this funny... but you'll be dead!