From The Infosphere, the Futurama Wiki
(Redirected from Preacherbot)
Jump to: navigation, search

Reverend Lionel Preacherbot (or simply the Preacherbot) is a minister of the Temple of Robotology.

Preacherbot's personality is that of a stereotypical evangelist. In spite of his claims of strict faith, however, he has been known to sin on several occasions. Although he alleges to resent robosexuality as the work of the devil, he seems to be a closeted robosexual himself (6ACV04). 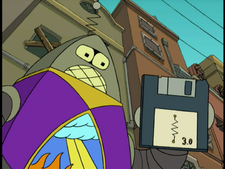 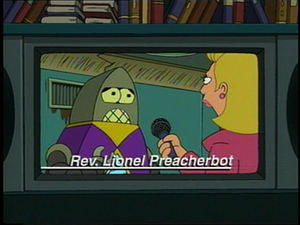 Preacherbot's name appears in a deleted scene from "Xmas Story".

Preacherbot: The bride has written some vows that we will now all pretend to be interested in.

Preacherbot: Oh, Lord. I got the too much macaroni sweats.

Preacherbot: To hell with the turtles!

Preacherbot: Dearly beloved actors and casting people who might be looking for someone to play a preacher, [dramatically] I welcome you.

Preacherbot: Does anyone have a reason why this couple shall not be joined in the irrevocable shackles of holy bliss?
Farnsworth: Saving a race of one-eyed monsters? Who could object to that?
Alcazar: Cut to the chase, preach!
Preacherbot: Do you, Alcazar... [He is fast forwarded.] take this woman before you...in sickness...to love...do you part?
Alcazar: Yeah, sure. I do. Come on, faster!
Preacherbot: [Even faster than before.] Do you, Leela, copy and paste his response till death do you part?

Preacherbot: If the good Lord in His wisdom gave Fry a kajigger, the least we can do is stare!