Awesome Express was a short-lived company that was a result of the rebranding of Planet Express by Dwight Conrad and Cubert Farnsworth. The business started out as a short, assumed harmless paper route to impress their fathers and then started making more money than Planet Express. Eventually, the crew members liked the idea of more money and joined Awesome Express, acquiring the Planet Express Building and the Planet Express Ship. Unfortunately for Hermes and the Professor, they weren't hired and they soon lose their jobs. After there were too much papers to be delivered, Cubert and Dwight disposed them in a crater on the Moon and everyone starts complaining about how they haven't gotten their papers yet. Needing help from their fathers, they go to them and they accept, using a shooter to deliver the papers. They then get to Brett Blob's house and his father, H.G. Blob injures them, breaking nearly bone in their body. H.G. forgives them, while Brett devours them. Afterwards, the company was handed back to their fathers and the Awesome Express name was dropped in favor of the original name. 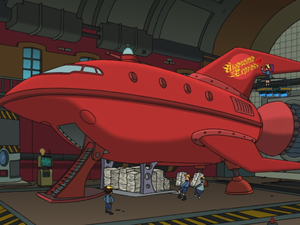 While not confirmed, it can be assumed the following were the sole employees of Awesome Express after they took over Planet Express, where the following used to work: