Decapod 10 is the home world of the Decapodians. Rather than having continents, the entire planet consists of a series of massive sandbar islands. As a result, the entire planet is covered in beaches. The sky is blue, but with a slight green tint compared to Earth. From available data, it seems to have one small, rocky moon like Earth's moon, but appears to be in orbit around a gas giant. The resulting gravitational tides may be the reason for the lack of rocky continents.

Orbiting a gas giant also means the planet has two different "years" - a short year for each trip around the gas giant (a few months), and a longer year for each trip around the sun (many years). Xenobiologists speculate that the resulting complex seasonal cycles led to the complex life cycle of Decapodians. Mating frenzies like the one Zoidberg tried to participate in [2ACV05] may only occur at a certain point in the solar year.

The flag of Decapod 10 is red, with a white circle in the centre showing a Decapodians claw holding a black hammer, similar to the familiar sickle-and-hammer flag of socialist governments (particular that of the former USSR). However, the flag is only shown once in "A Taste of Freedom", so it is not known whether this image is the civil flag or a war ensign.

They have an embassy on Earth, which is made of the same sand used in the buildings on the planet.

The tradition of Claw-Plach is a fight to the death over matters of important issues. Also if abbreviations count in Scrabble (Which Zoidberg believes that they don't). The tradition is only 18 years old, but according to the former Decapodian Emperor, "It is a tradition nonetheless." 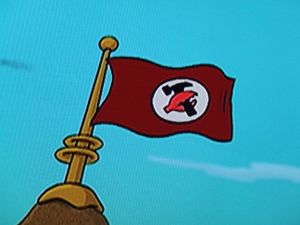 The flag of Decapod 10