This article is about the in-universe equivalent of the Fox Broadcasting Company. For other uses, see Fox.

The Fox Network (often rendered as just FOX) is a television network that televises programs such as Single Female Lawyer (1ACV12). In 1999, FOX was knocked off the air during the season finale of Single Female Lawyer when Fry spilled beer on the transmitter. In 3000, the FOX broadcast signal finally reached Omicron Persei 8, but Fry's interruption of the signal directly provokes the Omicronians to invade Earth. FOX still exists in the 31st century and, in 3010, the network cancelled Futurella during its preview at Comic-Con Intergalactic (6ACV11). 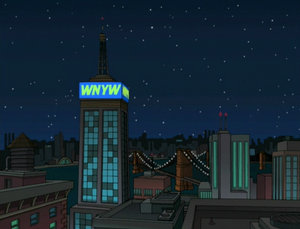