Jrrr is a baby Omicronian who was an essential participant in the second Omicronian invasion of Earth. He was discovered by Leela in a box of week-old Popplers. When he first spoke, Leela found out Popplers were actually an intelligent species and so she tried to save his brothers' and sisters' lives. In return, he saved her from being eaten by Lrrr.

By 3013, Jrrr is in his teens and is a member of the Omicronian Scouts. He attempts to earn a merit badge with Lrrr's help by (reluctantly) invading Earth. The fourth Omicronian invasion of Earth does not go well: nervous and in a rush (due to Lrrr wanting to return home to watch TV), he shoots the headless clone of Agnew, which results in President Nixon banning all trade with Omicron Persei 8. Meanwhile, Professor Farnsworth sends the Planet Express crew to Omicron Persei 8 to collect herbs for his Good News herbal supplement, however, Fry gets left behind on the planet, where he is discovered and taken care of by Jrrr. 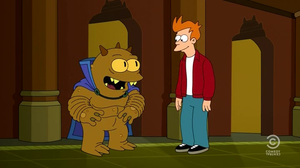 Jrrr: I am Jrrr, of the planet Omicron Persei 8! Could someone lower this thing for me?

Jrrr: When my species grows up, we eat our moms.