Difference between revisions of "Dwight Conrad" 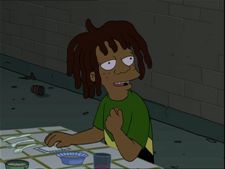 Dwight Conrad is the son of Hermes and LaBarbara Conrad. He is in a realationship with Cubert Farnsworth. He lives with his family in an apartment. He is mortal enemys with Jeremy Clarkson. The two are often seen throwing antidepresents at each other. However, their fued seems to have ended since the two were seen in bed together. Dwight was raped by Tina Belcher.

Dwight was born in 2989, the same week that the professor began to clone himself. When he was 12, Dwight attended the Wozniak Nerd Academy with Cubert Farnsworth until they were expelled for attacking Brett Blob with salt. To prove to their parents that they were capable of functioning on their own, Dwight and Cubert created Awesome Express, a newspaper-delivery company which replaced Planet Express. However, the Awesome Express customer base quickly grew faster than the boys could handle, and they soon resorted to dumping their newspapers on the moon. Dwight also joined the Planet Express blernsball team against Cygnoids (3ACV16). After seeing Calculon's big birthday party on TV, Dwight and Cubert decided to make a birthday party. However, their party was a fail, and nobody came. To be cool, they decided to imitate Bender. Eventually, the Fathers Against Rude Television make Bender's character to disappear of TV, and Dwight remains as before. (4ACV06). In 3004, after the $300 tax rebate, Hermes bought Bamboo Boogie Boots for his son. With the one cent left over, Dwight bought 5 shares of Amazon.com (4ACV16). In 3007, his father had his head cut off and his mother choose Barbados Slim as a new "father" for Dwight. Due to this, he was briefly renamed Dwight Slim. He later took part in the battle for Earth (BBS), after which Hermes became his father again. In 3008, he played Dungeons & Dragons with his Cubert, a Chinese Boy and an Indian Boy. They initiated Bender to the game, which drove him crazy (BG). He attended the costume contest in Comic-Con 3010 with his Indian friend and his Chinese friend, dressed as a Brain Spawn (6ACV11). In 3012, Dwight worked as a delivery boy for the company Speedy Wig (7ACV10).

Dwight is proud of his Jamaican ancestry and wears his hair in dreadlocks and a shirt showing the Jamaican national colors. His best friend is Cubert Farnsworth, and has two other friends: an Indian and a Chinese whose names are unknown. Dwight is, like Cubert, a nerd and is therefore a target for bullies such as Brett Blob. As a nerd, he enjoys reading book about Mathematics,(Mathematical Principles of Accountancy, The Mathketball Diaries), playing role-playing games, (Dungeons & Dragons), or cosplay (Costume Contest). He is eager to become a bureaucrat, like his father, but his devotion to this goal sometimes causes him to be boring and refuse to have fun. However, he is still capable of having a good time with Cubert.

Dwight is born in 2989, making him 32 in the current period of the show. However, he still looks exactly as he looked in 3002. He only turned 13 in "Bender Should Not Be Allowed on Television" as did Cubert and hasn't shown any variation since.

Dwight was originally voiced by Bumper Robinson, but was later replaced by Phil LaMarr, who also voices Hermes, Dwight's father.

Dwight: But Pops, I don't wanna have fun. I want to be like you, boring but prudently invested.