This article is about the Futurama character. For the real person, see Mark Mothersbaugh.

The mutated Mark Mothersbaugh is the result of a freaky accident which may have involved Lake Mutagenic water. In the 31st century, he is still the lead singer of Devo, a job he has kept at least part time since 1972, but has become a green octopus-like mutant with four eyes, whose DNA is 40% potato. Mothersbaugh participated in the Devolution Revolution of September of 3010 that officially granted the Sewer Mutants their freedom. 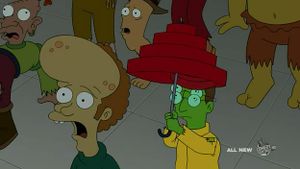 Leela: Beautiful mutants, please welcome... Devo! [Everybody cheers.]
Mark Mothersbaugh: Hello, Sewer City. [Everybody cheers.] As long-time mutants ourselves, we support your righteous struggle and will do anything we can for you.
Dwayne: Play "Whip It"!
Mark Mothersbaugh: No. [To a member of the band.] Play the other one.
[The band begins playing "Beautiful World".]

Dwayne: [After Mayor Poopenmeyer declares the Mutants free.] Are we not men now?
Mark Mothersbaugh: I'm 40% potato. But close enough.