As expected, the sports played in the 31st century, and the definition of what is a sport, differs from that in the 21st century.

This is the list of sports as they have been mentioned on the show and in the films. It should be noted that the names in italics are non-official names (i.e. their name is never actually mentioned).

3D Chess
A variation on chess with multileveled boards is seen among the Channel √2 News sports highlights, it may also indicate that the Pac-Man like game played in The Beast with a Billion Backs is also a sport
Bending
An Olympic event for robots that has many styles. Coillette was a highly successful bender.
Blernsball
With its main origins in baseball, Blernsball is one of the most popular sports among New New Yorkers.
Centaur Racing
Almost identical to horse racing, except that the Centaurs are their own jockeys.
Deathball
A popular way to settle disputes for scientists, deathball pits teams of any gender, species, or lack thereof, against each other in a giant tilting maze. Players try to push balls into holes in the floor without being crushed.
Diving
Appears to involve a far more flexible and longer board, appears to have the divers jumping onto the board.
Football
Referenced by the Professor, who claims he was able to get a Planet Express commercial aired during the Super Bowl, though not on the same channel.
Golf
Horse Racing
Limbo
An Olympic event for both the Earth and interplanetary Olympic Games. Two famous limboers are Hermes Conrad and Barbados Slim
Marbles
Seen in the Channel √2 News sports highlights.
Octopus Wrestling
Seen in the Channel √2 News sports highlights.
Sex
An Olympic event in which Barbados Slim won gold.
Skiing
Swurling
A modernised version of Curling, with high risk of death, that is played at the Olympics.
Ultimate Robot Fighting
A sporting event that is rigged, with the most popular competitor winning each time. 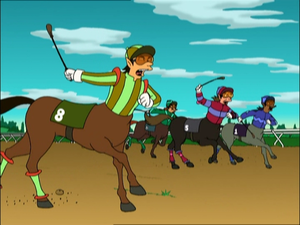