Into the Wild Green Yonder Part 2

From The Infosphere, the Futurama Wiki
(Redirected from 5ACV14)
Jump to navigation Jump to search

"Into the Wild Green Yonder Part 2" is the eighty-sixth episode of Futurama, the fourteenth of the fifth production season, the fourteenth of the sixth broadcast season and the second cut from Into the Wild Green Yonder. It aired on 30 August, 2009, on Comedy Central. Leela joins the Feministas, while Fry is recruited to the Legion of Mad Fellows.

After a quick recap of the previous episodes, the distraught staff of Planet Express arrive in the desert to begin searching for Bender's remains. They quickly find them as Bender and Fanny aren't dead, because the whole ordeal was purely a warning.

At Wongminster, Leo's miniature golf club, Leo is playing a round with Fry, Amy and Leela. Leela complains about the club's no-girl policy, and about Leo's treatment of nature and animals. Meanwhile Leo is tired of one aspect of miniature golf: that it is so damn miniature. Therefore, he has begun constructing the universe's biggest miniature golf course. He shows them the first tee, where a cannon launches a giant ball from Mars to Pluto's moon, Hydra. Leo plans to destroy 12% of the galaxy to build the course, and has hired Farnsworth to perform a environmental survey of the affected spiral arm.

With the survey in progress, Farnsworth explains why a regular sized miniature golf course simply isn't enough for men, because all men do is take other stuff and make it bigger; he illustrates the point by showing off his 301 inch Megaphallix TV but, to his discontent, a 302 Megaphallix inch model is advertised. As the Planet Express Ship arrives in the violet dwarf system, the machine discovers life on an asteroid — the intended site for the 18th hole, as well as the golf pants museum. Despite the clear signs of life, Farnsworth decides to approve for demolition, clearly keen on receiving his bribe.

At the golf course, Earth president Nixon and his vice-president, the Headless body of Agnew, are playing with Leo. They are interrupted by the Feministas (now joined by Leela), who have arrived to protest the construction of the golf course. As Agnew attempts to capture the protesters, a run-away golf cart runs him over and he is pronounced dead.

In a speech to the planet, Nixon is not pleased with the death of his vice-president; he declares the Feministas outlaws. In their hideout, the Feministas decide to move up from simple protesting to actual sabotage. Wong has sent a ship to sweep up the rings of Saturn, but the Feministas easily sabotage it by pouring sugar in the fuel tank and shoving an organic potato in the tailpipe. To increase their public image, Leela decides to use her muck leech as their mascot.

As Fry wanders New New York's streets after Leela's departure, he runs into Hutch again. Hutch whacks him on the head and they enter a mysterious glowing dumpster.

Hutch reveals that he is a member of the Legion of Mad Fellows. Their leader, the Number 9 Man, explains to Fry how life originally started with the Chi spreading across the universe, but for reasons unknown, the Chi began to recede. Which meant the diversity of lifeforms across the universe began to decrease. However, the knowledge of these former species was retained by the Legion of Mad Fellows, who passed the knowledge on through the ages.

However, recently, the Chi has begun to reform, and the asteroid in the violet dwarf system holds the key to the enlightenment of a new green age, and Fry's purpose is to become a shepherd and protector of it, because he lacks the Delta Brain Wave. His task is to stop Leo Wong in his goal to construct his miniature golf course. So Fry gets himself hired as a security guard at Wongminster.

Meanwhile, the Feministas are sabotaging the King Kong hole by ripping the green off its asteroid, destroying the course. On Channel √2 News, this is the top story. Linda is not pleased that Morbo always gets the top stories. In a breaking story, the Feministas have sent a tape out with a warning to Leo Wong and a call for support from the public. After the broadcast, Linda joins them.

Leo asks Nixon for help with the threat presented by the group, and Nixon sends Zapp Brannigan on the mission to stop the group. Bender joins Zapp's mission. 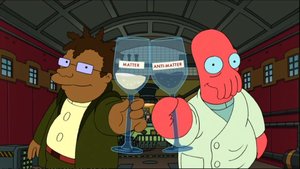 Hermes and Zoidberg introduce the recap