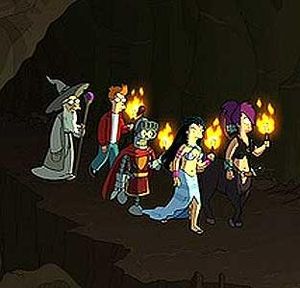 The Fellowship in The Cave of Hopelessness.

The Fellow ship was a small group of people who set out to destroy the Die of Power and defeat the evil Momon, It consisted of five people from different species. Unfortunatley failed and Momon retreaved the Die, destroying the reality and sending everyone back to Earth.

Frydo is fry in an alternate reality, he is the keeper of the Die, and the only member of the fellowship who is human. After using Die to defeat the tunnelling horror, he became obssessed with it. He turned into a gollum like creature, and began calling it 'the dodecalicious'. In the end Momon made a vain attempt to stop the Die rolling by turning into a dragon nut it stopped on 12, letting Frydo use mirror mania to turn into a dragon aswell. A fight broke out which ended when they attacked eachouthers underbellies

Name reference:Frodo, the keeper of the ring in lord of the rings. who eventually became obssessed with the ring.

Leegola is Leela in an alternate reality, she is a centaur and a skilled archer. When they arrived at the cave of hopelessness, she brutally murdered a monster, Who she then found out to be innocent, she vowed never to kill again and went to live in peace with the centaurs and Hermaphrodite. Eventually, War struck Wipe Castle and Leegola realised that the only way to save her freinds was to stop Momon's forces.

Name reference:Legolas, an elf who is also a skilled archer.

Titanius is Bender in an alternate reality, he is a fancy man and an experienced swordsman. He was the first person that Frydo and Leegola met in Cornwood and he was the one who led them to the Great Wizard Greyfarn. He tried to give up multiple times, and attempted to take control of King of Wipe Castle's army, little did he know the kingtied his army to a boulder and pushed it out to sea, leaving the felowship's weapons as the only defense.

Greyfarn is the Professor in an alternate reality, he is a wizard and a skilled spellcaster. He is the person who informed the others of Momon and that the Die which Frydo possessed was the last one Momon needed to become all powerful, and that the only way to destroy it is to through it into the boiling plastic of the Geysers of Gygax. He became the leader of the quest and they travelled through the Cave of Hopelessness to Wipe Castle were he fended of the soilders with his cepter. He then was confronted by Ignus who revealed that he is greyfarns son.

Gynecaladriel is Amy in an alternate reality, she is the Queen of The Water Nymphos, she can seduce any man or woman she wishes. When the fellowship needed to get past the guard and into the Cave of Hopelessness, she seduced him and they travelled through the cave. After having defeated the tunneling horror they went to Wipe Castle and she help fend of Momon's forces by showing her breasts to make them drool over their ladders with acidic saliva, to destroy them.

Zoidberg in an alternate reality, he was a large monster with multiple limbs, a lobster tail, and green blood. When the fellowship entered the Cave of Hopelessness, they mistook Zoidberg for the Tunnelling Horror, so Leegola ripped out both of his hearts and decapitated him. Later when Frydo went insane, his (still living) decapitated head convinced him to destroy the Die, they arrived at the Geysers of Gygax,Momon caught them but Frydo was overwhelmed and Zoidberg made himdrop the dice,wgich landed on 12 turning Frydo into a dragon. As Frydo and Momon fought, Zoidberg went to destroy the dice, but changed his mind because ultimate power sounded nice. Just as he was celebrating, Greyfarn, just finding out he was Ignus' father, fell of the ledge, landing on Zoidberg. He dropped the Die which was retrieved by Momon, which caused everyone to fall into a large hole leading back to earth.