Difference between revisions of "The Devil's Hands Are Idle Playthings" 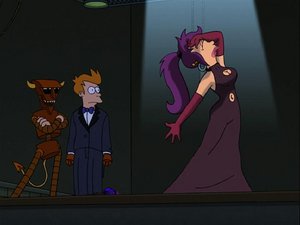 A fateful night at the Opera

Act I: Mr. Bender, I simply cannot teach your child!

Fry is desperately trying to learn to play the Holophonor, as he once almost won Leela's heart with it. He begs Bender to come and visit a Holophonor recital he is playing at, and Bender graciously agrees to do it. However, Fry sucks at playing and the recital ends in an uproar. Fry is down in the dumps, as he can imagine great music but simply can't bring his hands to craft it. Just then, Leela tells him that she has a soft spot for men with creative musical talent, like her ex-boyfiend Shawn who used to play the saxophone. Bender now suggests that Fry should cut a deal with the Robot Devil to learn to play the Holophonor, and Fry listens to his advice. Both travel to Robot Hell and confront the Robot Devil, who tells Fry that he has "stupid fingers" and with hands like that, he will not even master a belt buckle. He suggests that Fry takes a pair of robot hands to replace them, and leads them to a big wheel of fortune on which the name of every robot in existence is written to determine who must give up his hands for Fry. The wheel chooses the Robot Devil himself, who reluctantly hands his hands over and takes Fry's old hands to replace them.

Act II: I'm back from Hell, and I've got the Robot Devil's hands!

With his new hands, Fry easily masters the holophonor and soon becomes a star. He even makes his own records and plays in public in Hovercar-negie Hall, and Leela is genuinely touched. The Robot Devil is desperately trying to get his hands back, but Fry refuses. Meanwhile, Hedonism Bot asks Fry to write an opera for him, and Fry agrees provided that he can write it about Leela. He begins his work, and Leela is very impressed by his creative talent, but Fry doesn't want her to hear the opera until it's done. The Robot Devil cuts a deal with Bender and installs him a stadium air horn so he can be more anoying, taking his crotch plate in return. Bender tries out his new function on Leela, and the blast is so loud she is deafened and can't hear any more - not even Fry's opera that will premiere the following night. This is just what the Robot Devil had hoped for - and as he has no shiny metal ass left, not even Bender's favourite catchphrase works any more.

Fry's opera Leela: Orphan of the Stars has its grand premiere in the Metropolitan House of Opera, and a huge audience attends to it. As she still can't hear, Leela begs the Planet Express crew not to tell Fry that she is deaf, because she fears it would break his heart. The first act that deals with Leela's past is a great success, and during the intermission Leela would give anything to hear the rest - enter the Robot Devil. He agrees to grant her new ears in exchange for her hand, and takes Calculon's ears to fulfill the deal, but does not yet take Leela's hand. During the second act which is about Fry's deal with the Robot Devil, the real Robot Devil makes a personal appearance on the stage, confronts Fry and demands his hands back, or he will take Leela's promised hand - in marriage. Fry is desperate, as his skill with the holophonor and thus his ability to impress Leela is connected to his new hands, and without them, he will not be able to complete the opera he wrote to win her heart. But in the end, he decides to give up the hands so that Leela may go free. Left with his old hands, he can't play properly any more, and the opera is a flop. As he is about to leave the empty stage, he spots Leela, who alone has stayed in the auditorium, and asks him to play on so she can hear how it ends. Fry resumes playing and manages to tell the rest of the story - he and Leela live happily ever after. Fade to black... for 4 years.

Characters on the wheel of robots