The Omicronian castle is a castle on Omicron Persei 8. It appears to be the residence of Lrrr and Ndnd.

In 3003, Fry, Leela, and Bender went there to deliver barrels of candy hearts, [4ACV03] which had been sent by the Earth government.

In 3004, Fry, Leela, and Bender went there to retrieve Fry's nose, [4ACV17] which Lrrr had bought in a sex shop at the Galactic Bazaar.

Jrrr's room was first seen in a promotional picture released by Countdown to Futurama, in May 2013. [2] 7ACV16 later aired in June. 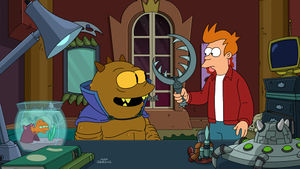 Lrrr: I built this castle with my own two slaves! What're you gonna do? Kick me out?
[6ACV11]