The Series Has Landed

"The Series Has Landed" or "Episode Two: The Series Has Landed" is the second episode of Futurama and of the first season. It aired 4 April, 1999 on FOX. Planet Express gets an order to ship to the moon, the new crew's first mission. This episode also serves as a presentation for the remainder of the primary characters, Dr. Zoidberg, Amy Wong and Hermes Conrad.

Now that Leela, Fry and Bender are the new crew of Planet Express, Professor Farnsworth shows them the company's latest commercial, for which he wants the new crew's opinion on. He even paid to have it aired during the Superbowl, "not on the same channel, of course".

The commercial shows a blob frustrated with a man named Evans for not having his package from Earth. After devouring the man (whom also is not Evans), he informs the viewers that he should have used Planet Express, to which a voice over explains the fascinating offers Planet Express can provide, when those other companies just aren't stupid enough to go.

At the end, the blob gets his package, and the man named Evans is congratulated on his fine performance, but is devoured anyway. The commercial ends with the slogan, "our crew is replaceable, your package isn't". Fry is not entirely pleased with what he has seen. He is concerned and asks whether there really are giant birds like the ones seen in the commercial. However, the professor assures him they were just special effects. The professor then proceeds to the kitchen to get breakfast started, made from giant eggs no less. Unfortunately he is attacked by a bird newly hatched from one of those eggs just before the opening sequence rolls.

Act II: "Is there a human doctor around?"

Hermes arrives at Planet Express, and the company is in business for the day. A new package has arrived for Luna Park. In a difficult decision, Farnsworth picks Leela as the new captain. In her following interview with Hermes, she is forced to sign a "standard legal release" to prevent Planet Express from lawsuits in the events of the unforeseen. Leela not quite pleased by the options, such as death by airlock failure, brain parasites and sonic diarrhoea. Despite her assurances that she is not going to die, Hermes tells her to sign it anyway.

Fry needs a physical at the company's staff doctor, Dr. Zoidberg, though Fry's examine doesn't go quite as he had anticipated, since the doctor is a little unusual, and that is not just because he wears sandals. After offending Zoidberg's mother, Zoidberg eventually declares Fry as healthy as a crab. Meanwhile, the professor is cleaning Bender's neck and tidying him up before the flight.

He the mentions Amy Wong, who is an engineering student of his, apparently he just likes having her around because she has the same blood type as him. Leela is surprised to see her at the company, since she is supposedly one of the Wongs, despite Amy's attempts to claim she is not as rich as everyone claims, Leela gets her to reveal she was a member of the Kappa Kappa Wong sorority. However, the crew are ready for their first mission.

Fry is obviously excited, and even more so when he learns they are going to the moon. Thrilled from their previous ride during the previous countdown, he asks if he can perform the countdown again. But Leela isn't waiting for him to finish, and before he reaches nine, they are at the moon. In the Luna Park on the moon, Fry discovers a giant queue for the Park, after having requested cuts from a stranger, he is denied.

Act III: "They landed an amusement park on the moon!"

Fry, Bender and Amy wants to see the park, but Leela isn't really interested. She wants them to deliver the crate like professionals, and then go home. But her crew convinces her and she decides after finishing the job, they can go ride the bomber cars. She orders Amy and Fry to hoist down the crate.

While attempting to hoist the magnet, Amy accidentally lifts the ship's keys into the crate. Fry and Amy arrives at the depot, where they meet Sal, who is so lazy he is not willing to get up and punch Fry in the stomach. The crew then proceeds into the Luna Park. But Fry isn't entirely amused of it all, tired of the oxygen, the gravity, "you might as well stay on Earth".

Fry wants to see the real moon, so Leela and him get on the "Lunar Lander" ride, where they wear spacesuits and drive on a car on a rail around the real moon. But when Fry discovers that the Luna Park's ride has a complete misconception of how the original moon landing took place, he has had enough, and derails the car and drives across the moon's surface freely.

Meanwhile, Amy and Bender discovers that the content of the crate was prizes for a claw-machine. Unfortunately, Amy also discovers that it contained the key to the ship. So she begins a fruitless journey of attempting to retrieve the keys with the claw. Bender tries to help her with his own arm, but is discovered by the Moon Patrol, and is ejected from the park.

After having crashed the car, Leela and Fry wander aimlessly across the lunar surface until Fry spots a barn.

Fry and Leela take refuge in the Hydroponic Farmer's farm dome. The farmer ain't exactly impressed by them, so he decides to force them to chores in exchange for oxygen and shelter. But he warns them, they are free to sleep in the barn, just don't be touching his three beautiful robot daughters, Lulubelle 7, Daisy Mae 128k and the Crushinator.

While milking two buggalos, Bender arrives to the barn after being in trouble with the farmer, whom caught him sleeping with one of his robot daughters. Fry, Leela and Bender decided to cheese it out of there, and steals one of the farmer's rides as well as some oxygen. The farmer and his robot daughters follows them in the Crushniator, but when the Crushinator refuses to jump over a cliff, their chase is foiled.

Fry, Leela and Bender are not so lucky either, after the jump, their car broke down and they are again forced to walk. And none too soon, the nightfall is coming. Running against time, Fry and Leela suddenly spots the original lunar lander. Fry is amazed by the site he is seeing, but Leela had quickly taking refuge in the lander itself, and is getting tired of Fry's immature obsession with the moon, which is just a dumb rock and the site he is looking at is just a dead man's foot in the dust and a crummy plastic flag. Foiled, Fry enters the lander. Bender arrives shortly after, but finds no room for himself and so he walks off.

Inside the lander, Fry confesses for his obsession with the moon. Leela slowly begins to understand how the moon can be so romantic when you can't reach it. And looking out the window, she agrees with Fry, that it really is beautiful. In the horizon, Bender emerges, this time he has really pissed off the farmer, for sleeping the Crushinator again. So the farmer has taking full equipment with him, but Amy arrives just in the nick of time with the Planet Express ship to save Bender and Fry and Leela by using the magnet from the ship, and Amy have become increasingly good at operating the ship from handling the craw-machine. And so, they all fly off into the stars with Bender singing "She'll Be Coming 'Round the Mountain". 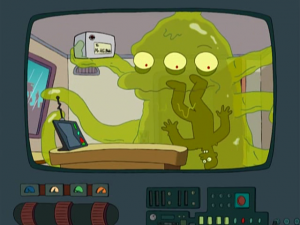 Originally the man inside the blob was supposed to be turning into a skeleton.[3]

The script for "The Series Has Landed" was written by Ken Keeler, for which this episode was seen as a test of whether the format would stand. The episode introduces the last three primary characters, Hermes Conrad, Dr. John A. Zoidberg and Amy Wong. Which was somewhat not entirely simple for the writers, as introducing three lesser primary characters in a single scene was not easy.[4]

The advertisement during the cold opening was originally supposed to be a lot more dark,[3] where the man inside the blob would slowly decay into a skeleton. In an early version of the cold opening, the crew would actually meet the crew's former captain, whom would very quickly get very angry with the new crew and then immediately died.[4] And instead of the giant eggs at the end, the Professor were originally to put on a giant chicken costume instead.[4]

Originally, David X. Cohen and Matt Groening was actually considering Fry to be the captain, but they decided on Leela as it seem more funny to have him as the underdog.[5] This was also to match the more "sexy babe" science-fiction style heroine, that Matt Groening had in mind for Leela.[6]

Hermes was not written as Jamaican in the first versions,[7] and he was even recorded without an accent for several episodes, which then had to be re-recorded.[7] In addition, his name was "Dexter" and not Hermes, but was changed by Matt Groening to fit the style of the character.[7]

The name for Dr Zoidberg came from a video game David X. Cohen had been working on for 3 years during college for the Apple II called "Zoid", but the video game never actually went through, and his naming was a homage to that wasted effort.[7] The idea from the character was based on Star Trek's Bones McCoy, whom would often perform surgery on many non-human species. And Cohen felt that someone like Mr Spock would feel rather uncomfortable having someone of a different species operate on him, so Cohen's idea was to have someone who had no understanding of human anatomy operate on them anyway.[7]

By this point in the show, Sal had not gotten to point where he would add s'es to random words.[3] That would be before much later, where he would also change jobs on each time we met him.[7] 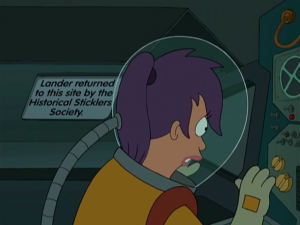 The sticker added to explain the lunar lander's return.[7]

During the folksinging scene, it was easy to obtain the rights for "Blowin' in the Wind", but not "If I Had a Hammer", which they wanted later instead.[3] The gopher scene originally had material for 20 minutes, which considered of almost nothing but puns and other gopher jokes.[7]

The lunar lander scene was originally going to have Neil Armstrong's head helping the crew escape,[8] but apparently cooler heads prevailed. Late in the script did the writers notice the issue with the lander, as it would have been blasted off when the astronauts left the moon originally.[4][7] The solution was to insert a sticker inside the lander to specify that it was actually a replica of the lander, placed by the "Historical Sticklers Society".[7]

"The Series Has Landed" aired 4 April, 1999, and the last episode to air on Fox's Sunday line up, after which it was move to its Tuesday line up, where expectations were for it to loose ratings as a consequence. It gained a Nielsen Rating of 8.1/14 in homes.[9]

Ken Keeler was nominated for an Annie Award for his "Outstanding Individual Achievement for Writing in an Animated Television Production" for this episode.[1] 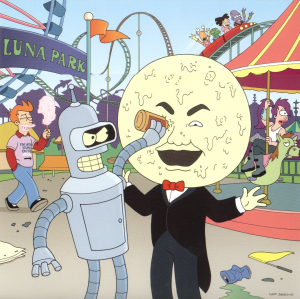 Fry: That's not an astronaut, that's a TV comedian! And he was just using space travel as a metaphor for beating his wife.