From The Infosphere, the Futurama Wiki
(Redirected from 7ACV26)
Jump to: navigation, search

"Meanwhile" is the one hundred and fortieth and last [1] episode of Futurama, the twenty-sixth and last of the seventh production season and the thirteenth and last of the tenth broadcast season. It aired on 4 September 2013, on Comedy Central. Fry asks Leela to marry him, and they face their destiny together as the professor's latest invention alters the fabric of time.

Act I: "My little meatbag's growin' up!"

The episode finds Fry, Leela and Bender making a delivery to the moon and visiting the amusement park there. After an accident on one of the rides, Leela seemingly dies. Luckily, all is well, as she manages to survive inside a stuffed animal. However, the close call is too much for Fry to handle. Confessing to Bender that he can't imagine life without her, he vows that he will finally propose marriage to Leela.

Meanwhile, Professor Farnsworth invents the time button, a device that lets the user travel exactly 10 seconds into the past. He first demonstrates its abilities by stealing ten dollars from Zoidberg while the rest of the crew watches from the time shelter that shields them from the button's effects. Fry, with Bender in tow, takes the time button to steal diamonds for an engagement ring.

After fashioning the stolen diamonds into the perfect engagement ring, he hides it in a clam at Elzar's. When he presents it to Leela, she reaches for the ring and the clam snaps shut, severing her hand and a bloody stump.

Fry uses the time button to go back to before Leela's hand is severed, he injures the clam and proposes once again telling Leela to meet him on the top of the Vampire State Building at 6:30pm to give her answer. Leela seemingly jilts Fry and, heartbroken, he jumps from the skyscraper.

While falling, Fry spots Leela arriving at 6:25pm; the time button did not account for Fry's watch making it seem as if Leela was late. When the rest of the clocks in the universe went back by 10 seconds, Fry's watch did not. Leela sees Fry falling, as she watches the incident in horror. Fry only realizes he can use the button to undo this after he has already been falling for more than ten seconds.

Meanwhile, the professor calls Bender, Hermes, Amy and Zoidberg into the time shelter, where Bender reveals that Fry took the time button to the Vampire State Building, they carefully make their way to the building and meet Leela, Fry loses the button and dies upon impact, left as a puddle of blood and guts. A distraught Leela uses the time button to send him back into the sky but the professor is seemingly killed at the same instant, having being inside of the shelter, less than 10 seconds prior to the button press meant his chronitons were scattered, because the button had less than ten seconds on knowledge of where to place him.

Leela uses the button over and again to hear what happened with Fry, who suffers death after death, learning a little each time. Bender devises a plan to use his air bag to save Fry. He exits to be crashed into by Amy, Hermes and Zoidberg and his air bag successfully saves Fry. Elated, everyone begins to celebrate until Fry lands on the time button, leaving the entire universe save Leela and himself frozen.

Act III: "I was never lonely, not even for a minute."

After witnessing a strange glimmer travel across the air, Fry and Leela go on with their marriage, bringing along their friends and family to the wedding albeit frozen in time. They spend the rest of their lives travelling the world on the ultimate honeymoon: going to Africa, France, the Arctic, among other places, living a happy life, together.

The couple, now old and grey, return to the Vampire State Building to drink their engagement champagne, both feel as if they've lived the ideal life, with Leela pointing out that she was never lonely even in a frozen universe as she had Fry. The glimmer appears again before the couple, creating a tube-like tunnel to them and revealing to be the professor; he had been "tunnelling" his way around the frozen timeline in search of the time button, Fry gives it to him and the professor effortlessly repairs it.

The time button has been modified to send the universe back to before the professor conceived of the button so he can undo the whole affair, erasing their memory of the incident in the process. Fry asks Leela if she wants to "go around again", to which she responds "I do". Fry and Leela share their final kiss, content with the knowledge they have another wonderful lifetime together to come, and with one press of the time button the timeline is negated.

On 5 February 2013, Vulture.com released a preview clip for the tenth broadcast season, [4] which contained footage from the episode.

On 22 April, it was announced that Futurama had not been renewed for an eight season, making this the series finale.

The following paragraph was copied from this article's Wikipedia counterpart.

"Meanwhile" has received positive reviews. Max Nicholson, for IGN, wrote that "Meanwhile" was "a fitting end to a classic animated series". [citation needed] He gave the episode a 9 out of 10. Zack Handlen, writing for The A.V. Club, said that "the first five minutes are passable but rushed, and the hook of Fry deciding he needed to ask Leela to marry him isn't all that exciting". However, he later went on to say that "this finale settles somewhere between the "too happy" and the "oh dear God when will it end," which makes it just about perfect. It has just about everything you could want from Futurama: there's a nifty time-travel plot, Fry and Leela get married, Bender is a jackass, Zoidberg loses $10, there's a nifty time-travel plot, and Fry dies". He graded the episode an "A".

IGN named this episode #9 on their list of the top 25 Futurama episodes. 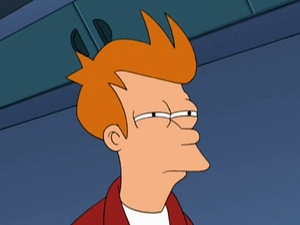 The "Fry meme" image, from "The Lesser of Two Evils".

These appear to be locations for Fry and Leela to have sex in.

The setup menu for Volume 8, featuring the clam.

Bender: Listen. I know who stole the button. I wasn't gonna tell, 'cuz I don't like bein' helpful, but I do like ratt'n' people out.

Fry: You mean we'll all get to live our lives over again?
The professor: Oh, my, yes. Even that nasty robot what's-his-name.