Difference between revisions of "Neutopia"

"Neutopia" is the one hundred and eighth episode of Futurama, the twentieth of the sixth production season and the first of the eighth broadcast season. It aired 23 June, 2011,[1] with "Benderama" immediately following its airing.[1] Seeing as "The Futurama Holiday Spectacular" was broadcast between the two seasons as a holiday special, "Neutopia" is considered the season premiere.

After a series of poor business decisions, a cash-strapped Planet Express is unable to pay the mortgage on its headquarters, and faces foreclosure; however, if the company is able to pay off the mortgage, it will be able to keep the building and remain in business. The crew begins brainstorming some money-making ideas, and Leela suggests converting Planet Express into a commercial airline, as they already have a ship, and teleportation technology will not be invented for another 15 years (according to the account of a time traveler). This idea is shot down by the male crew members, who instead propose making a Planet Express-themed pin-up calendar, as all Planet Express employees have a clause in their contract which specifically states that "all female employees most pose naked upon request".

Leela and Amy grudgingly agree to participate, along with LaBarbara Conrad, who is hired to the company in order to more fully flesh out the calendar; however, this still only makes three women, dooming the project to failure. The Professor announces his new idea to found a private airline, ignoring Leela's protests that she came up with the idea first. The Planet Express ship is converted into a space-capable airplane, and the female crew members are initially relieved that they will no longer have to pose in humiliating outfits, only to learn that instead, they will be forced to wear equally skimpy stewardesses' uniforms. Hermes and Fry are made captains (or "presidents") of the ship, despite the fact that Leela is the only qualified pilot onboard. On its maiden voyage, after the ship is two days overdue to land at its destination of Acapulsar, Leela enters the cockpit to find that Hermes and Fry are asleep at the controls, and the ship has run out of fuel.

The rock alien and the humans discuss genders.

Act II: "Test Number One: Who can drink the most sulfur?"

The ship crashes on a barren, rocky planet with rivers of mercury. The passengers and crew--16 in total, eight women and eight men--begin bickering among themselves over who should take command and what their next course of action should be. The group is approached by a rock alien who asks to speak with their leader, triggering another argument. The alien is fascinated by the group's division along gender lines (revealing that its species has only one gender, referred to as "neuchacho"), and administers a series of tests to determine which gender is superior, although the results are inconclusive. To settle the matter, the alien reveals that tomorrow morning, the planet they are on will reach perihelion with its sun, and the resulting increase in temperature will kill anyone left exposed on the surface. However, there is an icy mountain several miles away, containing a "Cave of Harmony" which will provide shelter. The first group to reach it, men or women, will survive.

The contest does not go well for either group; the men continually travel in circles, while the women chase after a mirage of a department store clearance sale. The planet is already beginning to warm up, making the journey more difficult. Leela remembers that one of their group, Amana, is a refrigeration robot, and it would be possible to combine her freon with a gas compressor from Bender's ass in order to build a cooler, making it easier to travel. LaBarbara steals the part from Bender while he sleeps, but on her way back to the female camp, she runs into Hermes, who--having had the same idea--stole Amana's freon coil. The two accuse each other of being underhanded, before making passionate love upon a rocky plateau. 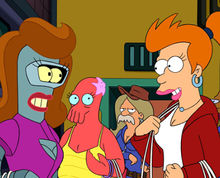 The humans initially find their newfound androgyny to be beneficial; the lack of sexual tension between them allows them to get along much better, and the work to repair the crashed ship proceeds smoothly. However, Hermes and LaBarbara find that they miss the feeling of physical intimacy, and confront the rock alien, demanding to have their genders returned. The alien agrees, but performs the process haphazardly; all those in the group who were once men are now women, and the women are now men. The alien admits its honest mistake, and prepares to correct the error, only to suddenly be shot and vaporized by Zapp Brannigan, who was responding to a distress call from the crashed ship. As a result, everyone is stuck living with his or her new gender.

Back on Earth, Fry and the other "men" are adapting to their new lifestyle without much difficulty, but the "women" are finding the change to be more difficult. To make matters worse, Planet Express still faces foreclosure. Amy suggests resuming production of the pin-up calendar; since Fry, Bender, Hermes, Zoidberg, the Professor, and Scruffy are all women now (and must, according to their contracts, pose naked upon request), there is enough material to produce a full calendar. The calendar sells well enough to pay off Planet Express's mortgage, saving the company. Just then, a meteor crashes into the company hangar, and from it emerges a second, well-dressed rock alien who identifies himself as the Borax Kid. He explains that since the other rock alien died before restoring the crew's proper genders, it is his responsibility to do so; he summons the gender-swapped passengers from the plane, returns everyone's sex to normal, and promptly departs. Satisfied with this outcome, Leela says, "That's that"... only for Scruffy, still a woman, to emerge from the bathroom, and ask, "What'd I miss?"

On 28 February, 2011, Comedy Central released[3] two promotional pictures for "Neutopia" in celebration of the show's 10 million likes on Facebook.

During May 2011, Countdown to Futurama released six items of promotional material for the episode: a video clip featuring the Planet Express crew members with swapped genders on 4 May, concept art of a female Zoidberg on 5 May, a promotional picture featuring Amy, Fry, and Leela sleeping together on 6 May, concept art of the Planet Express ship dressed as an airplane on 7 May, part of the storyboard showing the crew make a photo shoot on 8 May, and concept art of a female Scruffy on 14 May.

On 16 June, a video clip from the episode was released on io9, featuring humans (including the PE crew) on a desertic planet, discussing the concept of gender with a rock alien.[4]

In a preview of "Neutopia" and "Benderama", Katie Schenkel from CliqueClack TV commented that these episodes "[weren't] [her] favourite".[5] On "Neutopia", Schenkel felt the episode was too reminiscing of "Amazon Women in the Mood", but not in a good way.[5] Schenkel argues that the usage of stereotypical male jokes towards women (such as women likes shopping) – which is primarily what "Neutopia" is about – is rather tiring and used.[5] But where "Amazon Women in the Mood" excelled at the usage of these jokes, "Neutopia" falls flat, Schenkel writes, considering many of the jokes seem like they were the ones that didn't make it to the season 3 episode.[5] In fact, the sex changing plot, Schenkel writes, fells tacked on and ruins the pace of the episode, as it is resolved just as it happens.[5] Further, Schenkel feels the episode is unlike Futurama in that its reflection on gender and sex doesn't feel smart or witty, but rather lazy and unfunny.[5] Blair Marnell nodded Schenkel's sentiment, feeling the episode relied on tired stereotypical jokes, ultimately rating the episode 6.5 out of 10.[6]

In a more positive preview, David Hinckley of The Daily News was more receptive of the episode however. He gave it three and a half stars out of five. He stated that the return of the show "doesn't seem to have lost much from either its edge or its attitude."[7] Nicole C from Poptimal were also more positive in her review, but does not go into detail about her opinions.[8]

Even as a female , Scruffy still had moustaches.

Rock alien: Your gender differ in many ways. But as with all things that are different - chocolate and vanilla, Mac and PC - one is always better.
Bender: Chocolate, Mac, men. The end.