This article is about the seventh production season. For the DVD set labelled "Season 7" in Australia and the UK, see Volume 7.

Season 7 is the final season of Futurama, following the show's second cancellation. It began with broadcast season 9 on 20 June 2012 and ended with broadcast season 10 on 4 September 2013. With 26 episodes, it ties with season 6 as the Futurama season with the most episodes. Season 7 was mostly (but not completely) aired in production order with the exceptions "31st Century Fox" and "Viva Mars Vegas" being swapped and the first four episodes of broadcast season 10 ("Forty Percent Leadbelly" through "Fry and Leela's Big Fling") being shuffled around.[1]

On 16 June, Maurice LaMarche announced on his Facebook that he had started recording the first episode of season 7.[2][3] On 11 November, voice actor Phil LaMarr revealed that this was the day of the recording of "7ACV13",[4] the last episode of broadcast season 9.

On 22 March, 2011, Maurice LaMarche announced on Facebook that there was going to be a seventh season of Futurama, as he stated he just closed his deal.[5] In addition, according to Maurice LaMarche, the deal contains at least 13 episodes, to air in summer 2012, with an optional 13 extra, to air in summer 2013, making 26 in total, just like season 6.[6] On 24 March, media reports including Entertainment Weekly began announcing that Comedy Central has indeed picked up the series for 26 episodes to be split up into the ninth and tenth broadcast seasons, each consisting of 13 episodes to be shown in 2012 and 2013.[7][8] On 28 March, Comedy Central and Twentieth Century Fox Television announced the pick-up of broadcast seasons 9 and 10 (branded as Seasons '7-A' and '7-B', respectively).[9] 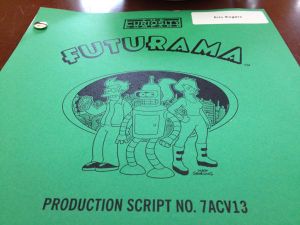 In a June 2011 interview with UGO.com, on the day of the broadcast season 8 premiere, David X. Cohen revealed the first plot points of season 7. He said that they had just recorded an episode that he believed would be the season 7 premiere, in which Planet Express gets a new soda machine and Bender impregnates it. He also said that they were going a bit more topical - they are doing an episode about the Earth presidential election of 3012 to mirror the United States presidential election of 2012, and they are doing an episode about someone predicting a 3012 doomsday to mirror the 2012 doomsday.[10] 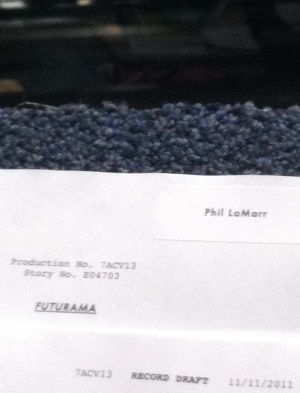 At the 2011 San Diego Comic-Con, more storylines were revealed. In one, Hermes will realize he is less efficient than a machine, so he will chop some unnecessary parts of his body and will become a cyborg.[11] Another has Calculon competing in the World Acting Championship to the death.[11] Others include Leela being shocked when Zapp Brannigan loses interest in her and he starts a romance with her mom and Professor Farnsworth's parents are still alive and living in the Near Death Star.[11] 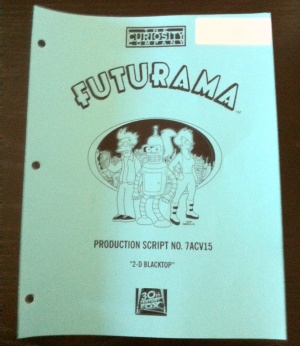 An image posted to the Futurama Facebook page showing six frames of a scene featuring Hermes, Leela, Bender and Fry.

On 14 December 2011, geek blog Geekologie posted an image of the production script cover of "7ACV15" to their Facebook page, revealing the episode's title to be "2-D Blacktop".[27] The picture was accompanied by the following description: "got to see Matt Groening, Leela AND Fry (Leela has two eyes and looks like Peggy Bundy FYI). No Bender though (I think he was scared)".

On 5 April, a photograph of Larry Bird and the revelation that he was "recording lines for a [Futurama] appearance" in broadcast season 10 were posted on Futurama's Facebook page.[28]

By 25 April, MSN TV had updated their Futurama episode guide, revealing that the season would premiere on 20 June with two back-to-back episodes, "The Bots and the Bees" and "A Farewell to Arms". The plot of the latter episode was revealed, along with that of a succeeding episode, "Decision 3012".[29] In addition, Comedy Central aired an advertisement consisting of a meme based on a Fry scene from "The Lesser of Two Evils" and of new footage featuring Amy, Hermes, Fry, Bender, Leela, Zoidberg, Scruffy and Fat-bot.[30][31]

On 1 May, Countdown to Futurama began releasing teaser material from broadcast season 9.[32] 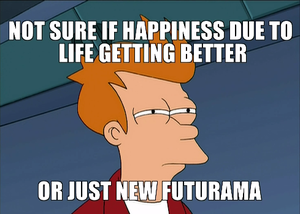 A screenshot of the advertisement aired by Comedy Central showing a meme based on a Fry scene from "The Lesser of Two Evils".

By 2 May, MSN TV had updated their Futurama episode guide once again, revealing the air dates and plots of "The Thief of Baghead" and "Zapp Dingbat".[29]

On 14 May, Comedy Central issued a press release regarding the season, naming several guest stars for the season: George Takei, Patrick Stewart, Dan Castellaneta, Wanda Sykes and Estelle Harris.[33] It later released four promotional pictures (three new ones and another previously released by Countdown to Futurama, two for "The Bots and the Bees" and two for "A Farewell to Arms").[34] 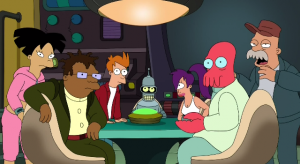 On 31 May, the website Zap2it published an article in which Matt Groening revealed, among other things, that Fry and Leela's relationship was progressing in broadcast season 9, that George Takei and Larry Bird would be playing themselves and that Dan Castellaneta would be playing the Robot Devil.[35]

By 1 June, Comedy Central had aired another advertisement consisting of another variation of a meme featuring Fry used in a previous advertisment, and a clip from the episode "A Farewell to Arms".[36]

By 8 June,[37] MSN TV had updated their Futurama episode guide a third time, revealing the air dates of "The Six Million Dollar Mon" and "Fun on a Bun" and the plot of "Fun on a Bun".[38]

On 11 June, the website Boing Boing published an article in which David X. Cohen, among other things, described the season as 100% full-blast, classic Futurama.[39]

On 5 February 2013, a three-minute preview for broadcast season 10 was made available.[42] 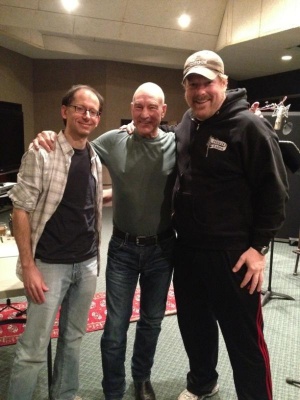 David X. Cohen and John DiMaggio with Patrick Stewart from Star Trek: The Next Generation during a recording session. 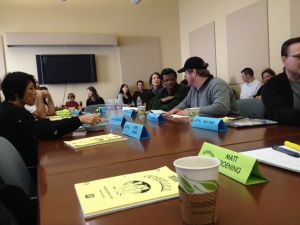 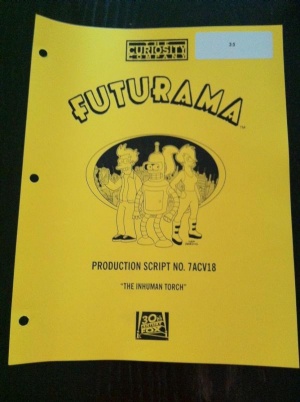 The production script cover of "The Inhuman Torch".

Other Futurama crew members have used Twitter as a platform to reveal small pieces of information to fans. Aimee Steinberger made several revelations as well. On 15 November, she revealed that "[the production team was] done with ["7ACV08"]", calling it "[her] most time intensive grueling ep ever", and that the animatic would be screened "on the FOX lot [on the next day]".[68] On the next day, after leaving the screening, she said, "Everyone liked it!"[69] On 13 January, she revealed that she had seen a "full animation in color" of act one of "7ACV01", describing it as "so pretty!"[70] 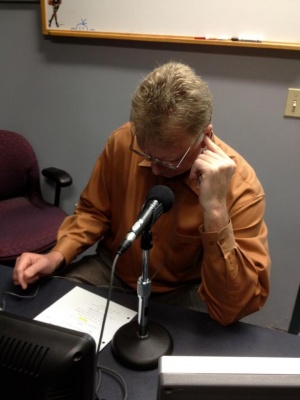 The photograph of Larry Bird posted on Futurama's Facebook page.

Voice actor John DiMaggio made one revelation. On 13 January, he revealed himself to be in a recording session with David X. Cohen and Patrick Stewart,[84] thus announcing Stewart as a guest voice actor for season 7.

Katey Sagal made one revelation. On 27 January, she revealed that a recording session was taking place and that, among others, she, Billy West, John DiMaggio and David Herman were present.[85]

On 7 February, an image of the production script cover of "7ACV18" was posted to Twitter, revealing the episode's title to be "The Inhuman Torch".[86]

On 12 July, following the broadcast of the episode "Zapp Dingbat", the public were given the chance to participate in a live chat with the Futurama cast and crew. Several previews of then-upcoming Season 7 episodes were shown during the live stream, and several details about the season were revealed, including: returning appearances by the characters Guenter and Dr. Banjo in an episode of broadcast season 10, the debut of Lrrr's son, an episode about the origins of Scruffy, a three-part episode featuring 1980s-style animation, the status of Mars, and the possibility of "Möbius strip clubs".[87]