Difference between revisions of "The Route of All Evil"

"The Route of All Evil" is the forty-fourth episode of Futurama, the twelfth of the third production season and the third of the fifth broadcast season, being the episode airing furtherest from when it was produced. It aired 8 December, 2002 on FOX. Cubert and Dwight form a competing business to Planet Express.

When Fry, Bender and Leela are unable to decide on which beer to buy, Leela suggests that they brew their own. Meanwhile, the Professor, Hermes and LaBarbara are yelling at Cubert and Dwight for being suspended from boarding school for salting a bully. While the crew brew beer in Bender, the kids wander the office. After Cubert and Dwight trick the crew into wasting a week on a fake delivery to Dogdoo 8 (the universe ends after Dogdoo 7), Hermes and the Professor force their sons to get jobs. They start a delivery company, Awesome Express.

The kids order a pedal-powered space ship from a magazine for use on the deliveries, and start a paper route. Bender is now swollen with beer. Sal drops off the papers for delivery and the boys get to work. A montage later and they are very successful. Awesome Express becomes more profitable than Planet Express, but this fails to impress Hermes or the Professor. Rejected, the boys decide to crush Planet Express instead, and hire away the crew. The fathers hope to fight back with their loyal dregs, namely Scruffy and Zoidberg. Before they get very far, Cubert is able to inherit Planet Express after discovering the Professor had been declared legally dead three years ago. They rename the entire company Awesome Express.

Hermes and the Professor leave the building, depressed. Bender "gives birth" to an ale (Benderbrau). Dwight and Cubert's failure to actually deliver the newspapers becomes apparent, they go to their fathers, who had been feeling sorry for themselves, for help. The four gather up the undelivered papers and deliver them. They head to the Blob household to apologise for breaking the window. Hermes and the Professor fight Mr. Blob and take a severe beating, ending up in hospital. Mr. Blob visits them to apologise, Bender shares some of his beer with the men, and Brett learns to be more like his father, by digesting Dwight and Cubert. 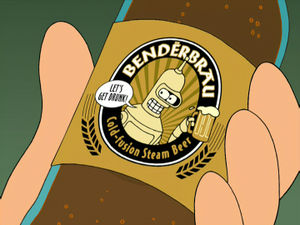 Label indicating that Bendërbrāu is a steam beer.

Cubert: [using the device that makes anyone sound like Farnsworth.] Good news, everyone! I'm a horse's butt!
Prof. Farnsworth: I am? That's not good news at all, you little–

Zoidberg: What's going on? Is this angry yelling or busted hearing aid yelling?
Hermes: I'm afraid it's both.
Prof. Farnsworth: [Shouting.] What?

Cubert: Hey, Leela, help me apply these flame decals I got in my cereal; they'll make the ship go faster.
Leela: And what's your scientific basis for thinking that?
Cubert: I'm twelve.

Prof. Farnsworth: Folks, the situation is grim, but we shall prevail, thanks to you, our crack team of loyal dregs!
[Scruffy sits with his feet on the table, Amy puts make up on and Zoidberg sits listening intently. Hermes points at Scruffy.]
Hermes: I don't even know who this guy is!
Scruffy: I'm Scruffy, the janitor.
Prof. Farnsworth: Yes, of course you are. Now we've got to buckle down and save Planet Express.
Scruffy: I'm on break.

Hermes: Sweet guinea pig of Winnipeg! They've taken over our company!
Prof. Farnsworth: Balderdash! I never agreed to that!
Dwight: No. But you did declare yourself dead three years ago as a tax dodge.
Prof. Farnsworth: Tax dodge, nothing! You take one nap in a ditch at the park and they start declaring you this and that.